Mythbusitng 101 – Older People Are Not Grouchy

Home/Uncategorized/Mythbusitng 101 – Older People Are Not Grouchy
Next

Mythbusitng 101 – Older People Are Not Grouchy 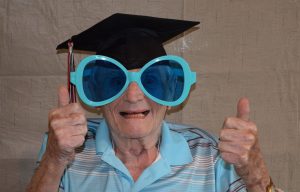 One of the most pervasive yet incorrect and unfair myths about aging adults is that they are unhappy, grumpy folks.  A study of Disney characters found that 25% of the older characters were angry, grumpy or stern.  This myth isn’t just being perpetuated through Disney films, rather the stereotype is so accepted as fact that movies such as “Grumpy Old Men”, “Gran Torino” and “City Slickers” to name a few each portray the main characters as angry elderly men with few redeeming qualities.

Based upon our collective experiences, we at Maplewood Village Assisted Living Facility collectively state that this stereotype is pure hogwash.   We find that actually the opposite to be true.   Multiple studies have shown that happiness generally begins to increase after 50 and one recent study published in the Journal of Economic Behavior concluded that people are generally their happiest after they reach retirement age.  Another study shows that if you are agreeable to start with, you’ll only grow more so, despite and in the face of physical and health challenges faced as you grow older.

The staff at Maplewood Village is blessed to share life with aging adults each and every day, to witness 91 year old men holding chairs for the ladies in the dining room; to witness common courtesies long forgotten in today’s “me first” society; to overhear pleasant conversations about the recent successes of children and grandchildren; to hear first-hand the remarkable lives our residents have lived and how their focus isn’t on infirmities or declining health and the ever increasing list of losses that accompany aging but rather the precious things in their everyday life, their family, their friends, that they are so extremely grateful for.   In contrast to the myth of the grumpy senior citizen, studies, supported by our own experiences, show that older people focus significantly more attention on the positive aspects of life in contrast to the younger segment of the population that has a tendency to focus more on negative aspects.

The elderly seem to be better able to accept the things that are beyond their control and which they cannot change, often facing their limitations with dignity and a healthy dose of humor.  They are more likely to look for and find silver linings when facing major challenges.  Older people are much better at getting along with others than younger people are and are more content in their interpersonal relationships.

And sometimes things aren’t always what they appear.  In speaking to an elderly man who seemed to employ a grumpy persona often, he explained that he got a lot more attention by acting grumpy and the more attention he got, the happier he was.  He compared his situation to that of a crying baby.  Hmmm, a rose by any other name is still a rose and very likely grumpy old men or women are not really so grumpy after all.