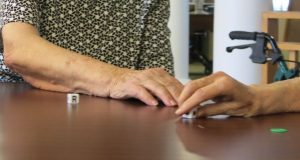 Irrespective of age, each of us are voyagers on the wild ride known as life, navigating numerous paths along the journey.   Life is a grand adventure capable of evoking a myriad of emotions, some of which bring much joy, others which result in sadness.  As we journey the path of life, we each experience loss, which seems more pronounced as we age.   For seniors, the loss of physical and mental abilities fuel added concern.   Vision, hearing, memory issues, diminished energy and flexibility, each of which impacts the degree of independence a person controls, are just some examples of losses that raise the level of anxiety, anger, confusion and fear in the senior population.   In fact, studies show that senior citizens are more afraid of losing their independence than of death or losing their spouse.

To the extent possible, taking charge of the elements that can be controlled and advance preparation for the milestones encountered on the path of life can alleviate the stress of some of the losses we face.  We can’t prevent the loss but we can prepare for it, secure in the knowledge of how we will deal with it when the time arrives.

The good news is that we often have more chances to make choices enabling us to take control of our lives, to the extent we can, than we realize.  For seniors, recognizing feelings about loss and patiently coming to acceptance of them can help adjust to changing levels of independence.   It is only human to harbor some degree of anger over those things we value and lose, whether it be people, jobs, treasured possessions, health or independence.  But the negativity fuels frustration and anger which is often misdirected and sometimes so extreme it adversely impacts an aging adult’s physical and emotional health.

As losses accumulate with age, a person should honesty assess their level of anxiety and frustration and the way they are being dealt with.  It is also a good time to realistically question any impact on the quality of life. Including independence.  This type of honest self-assessment may lead to initiating discussions with trusted loved ones about positively dealing with changes.

No one likes to admit to having reached a stage in life at which his or her independence has been compromised but proactively dealing with this stage of life can pave the way for enjoying new experiences which might result from adapting to changes.   For a senior living alone, that might take the form of hiring a caregiver, moving in with a family member or the consideration of assisted living as an option.  It allows them to manage the changing concept of their independence in a positive manner rather than feeling lost in totally unfamiliar territory.